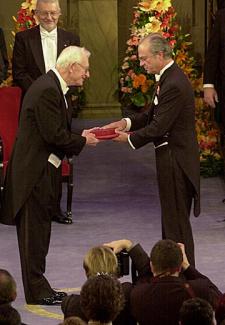 The Alan G. MacDiarmid Medal was introduced to honor the only member of the Penn Chemistry standing faculty to receive the Nobel Prize in Chemistry.

Alan MacDiarmid was the recipient of the 2000 Nobel Prize in Chemistry, along with former Penn professor and director of LRSM Dr. Alan J. Heeger, now at the University of California at Santa Barbara, and Dr. Hideki Shirakawa of the University of Tsukuba in Japan. They were honored for their 1977 discovery that plastics, or polymers, can be made to conduct electricity much like metals. This finding turned on its head the conventional wisdom that polymers could not conduct electricity, and unleashed new research among physicists, chemists and materials scientists worldwide. This technology is now applied in cell phones.

© 2020 The Trustees of the University of Pennsylvania
Penn Weblogin