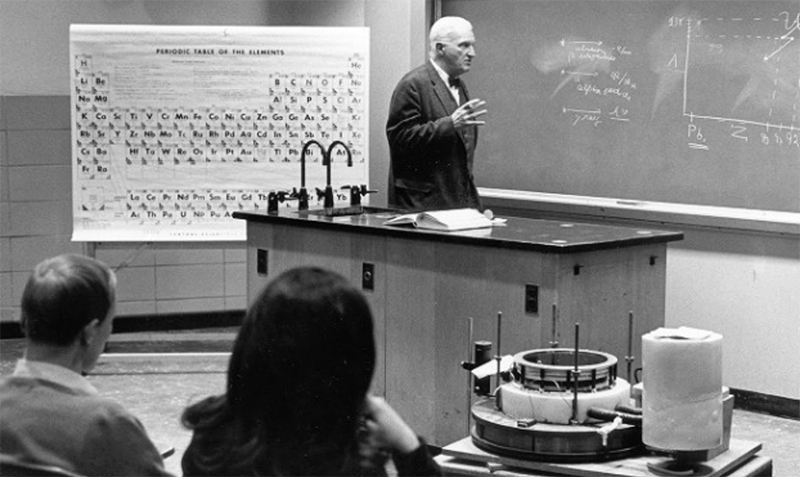 A Brief History of the Department of Chemistry at Penn

The University of Pennsylvania has a long and storied history dating back to its earliest origins in colonial Philadelphia in 1740. Over the following century and a half, Penn would dramatically expand and restructure into the organization that has become familiar to us today.

Chemistry did not begin at Penn as an independent field. Instead, the discipline fell under several umbrellas before emerging as a natural sciences department. In 1765, the Medical School was established by John Morgan. One of the first faculty of this new school was Benjamin Rush, the only signer of the Declaration of Independence to hold a medical degree. Rush was appointed Professor of Chemistry at the College in 1769. The following year, Rush published “A Syllabus of a Course of Lectures on Chemistry”, the first American text on the subject. A series of high profile appointees to the College followed, including Caspar Wistar, James Hutchinson, and James Woodhouse. This subdivision of the Medical School would later evolve into the Department of Biochemistry and Biophysics.

In 1872, the University moved from Center City to its current home in West Philadelphia. Coinciding with this move was another restructuring which would result in the formation of the Department of Science (later renamed as the Towne Scientific School). The Scientific School was the fourth school to be founded at the University (following Arts, Medicine, and Law). Among the first appointments in this school was noted German chemist Frederick A. Genth as Professor of Analytical and Applied Chemistry and Mineralogy in 1874. This was the first Chemistry appointment outside of the School of Medicine and is the generally accepted date of the founding of the Department.

In 1876, the University appointed Edgar Fahs Smith as Associate Professor of Analytical Chemistry. Within a short time, Prof. Smith would rise to Director of the Chemistry Laboratory and in 1910 would be appointed the thirteenth Provost of the University, a position he would hold for twenty years. He served as President of both the American Philosophical Society and the American Chemical Society, and he would come to be a preeminent historian of chemistry. He is remembered at Penn to this day through both The Edgar Fahs Smith Memorial Collection maintained by the Penn Library and the Edgar Fahs Smith Memorial Lecture, one of the most prestigious lectureships the Department offers. Under Prof. Smith’s stewardship, the Department would see unprecedented growth. The Department granted its first Ph.D. in 1891 and more than 150 in the half-century that followed. By 1892 the Department was housed in the Lea Institute of Hygiene (later renamed Smith Hall) and two years later would move into its first independent home in the John Harrison Laboratory of Chemistry (on the site of the current 1970 Chemistry Building) on 34th Street north of Spruce Street.

Gertrude Klein Peirce and Anna Lockhart Flanigen came to Penn from Women's Medical College. The two women were the first female students admitted to the University of Pennsylvania and both studied Chemistry (earning certificates of proficiency in Chemistry in 1878). Miss Peirce would go on to be a co-author with Edgar Fahs Smith of a paper on the products obtained in the Nitration of meta Chlorsalicylic Acid.  Miss Flanigen would earn her doctorate at the University of Pennsylvania in 1906 and became a professor of chemistry at Mount Holyoke College.

The Department would continue to grow and prosper over the next century and beyond. Penn Chemistry has been associated with seven Nobel Laureates, at least eighteen members of the National Academy of Sciences and no less than two Olympic athletes.

Today the Department is an internationally reknowned center of molecular research. Within the department, the traditional sub-fields of biochemistry, organic, inorganic, and physical chemistry serve as a framework from which collaborative, interdisciplinary research is launched.

1972 Nobel Prize In Chemistry . M.S. in Chemistry (1939), University of Pennsylvania,  Born in Monessen, Pennsylvania in 1916.  B.S., Swarthmore College, Ph.D., Harvard Medical School.  His award acknowledges pioneering work in establishing the connection between chemical structure and catalytic activity of the active center of ribonuclease.  His work provided an answer to the question concerning the way in which the active enzyme is formed in living cells. Christian B. Anfinsen died in 1995.

1985 Nobel Prize In Medicine.  B.S. in Chemistry (1962), M.D. (1966), University of Pennsylvania  Born in Brooklyn, New York in 1941.  He was awarded for discoveries concerning “the regulation of cholesterol metabolism.”  These discoveries have led to new approaches to the treatment and prevention of atherosclerosis.  While at Penn, Michael Brown also served as features editor and editor-in-chief of the Daily Pennsylvanian.  He is currently a Professor of Molecular Genetics and Internal Medicine & Director of the Erik Jonsson Center for Research in Molecular Genetics and Human Disease at the University of Texas Southwestern Medical Center.

1999 Nobel Prize In Chemistry.  Ph.D. in Chemistry (1974), University of Pennsylvania  Born in Damanhur, Egypt in 1946. B.S., University of Alexandria.  He was honored for the development of ultrafast laser techniques for observing chemical reactions in real time and unraveling the dynamics of fundamental chemical processes.  While at Penn, he did his Ph.D. thesis under the tutelage of Professor Robin Hochstrasser.  Ahmed Zewail is presently the Linus Pauling Professor of Chemistry and Professor of Physics and the Director of the NSF Laboratory for Molecular Sciences at the California Institute of Technology.

2000 Nobel Prize In Chemistry . Postdoctoral Research Associate (1976 – 77), University of Pennsylvania  Born in Tokyo, Japan in 1936.  Ph.D., Tokyo Institute of Technology.  While a junior faculty member at the Tokyo Institute of Technology, Shirakawa synthesized an unusual fibrillar form of organic polymer having a bright silvery luster.  Shortly thereafter while a post-doctoral associate at Penn, he and Professors Alan MacDiarmid and Alan Heeger (Physics) discovered the chemical doping of this material which resulted in the synthesis of the first conducting polymer.  He is Professor Emeritus at the Institute of Materials Science, University of Tsukuba, Japan.