Research in the Walsh group merges the fields of catalysis and organic and inorganic synthesis with the goal of achieving new catalytic and stoichiometric transformations.

Application of cation-pi interactions to facilitate activation of benzylic C–H bonds. This is exemplified by the arylation of toluene, where it was demonstrated that cation-pinteractions enable the deprotonation of toluene with relatively mild silyl amide bases (Scheme 1) and Cs+catalyzed aminobenzylation of aldehydes (Scheme 2).

The study of unusual reactivity has been an active area of recent research in the Walsh group.  These include the discovery of 2-azaallyl anions as super electron donors (SEDs).  In this chemistry, deprotonation of benzophenone ketimines generates 2-azaallyl anions (A0).  Traditionally, these species undergo two electron reactions, acting as nucleophiles.  We found that they can also undergo single electron transfer (SET) to the starting ketimine (Scheme 3) to generate a 2-azaallyl radical (A0) and a ketiminyl anion (A2).  As shown in Scheme 4, the 2-azaallyl radical can react with unactivated vinyl bromides to give vinylation products under transition metal free conditions.  The utility of this method was demonstrated in the synthesis of benzofuran derivatives (Scheme 5).  We have also found that 2-azaallyl anions react with [1.1.1]propellane to give bicyclo[1.1.1]pentane (BCPs) derived amines. The BCP group is a bioisosteres of the phenyl group, making these compounds BCP analogues of diarylmethyl amines, which are extremely important in pharmaceutical sciences (5 of the top 200 medications contain diarylmethyl amines).

Other reactive intermediates include the development of sulfenate anions [ArSO]–for dehydrocoupling of benzyl chlorides, the first catalytic synthesis of all three bonds of alkynes (see below). Application of these reactions to the synthesis of stilbene-based polymers, including novel PPVs, is an area of ongoing work.   For more information, see the research areas section of the group’s website! 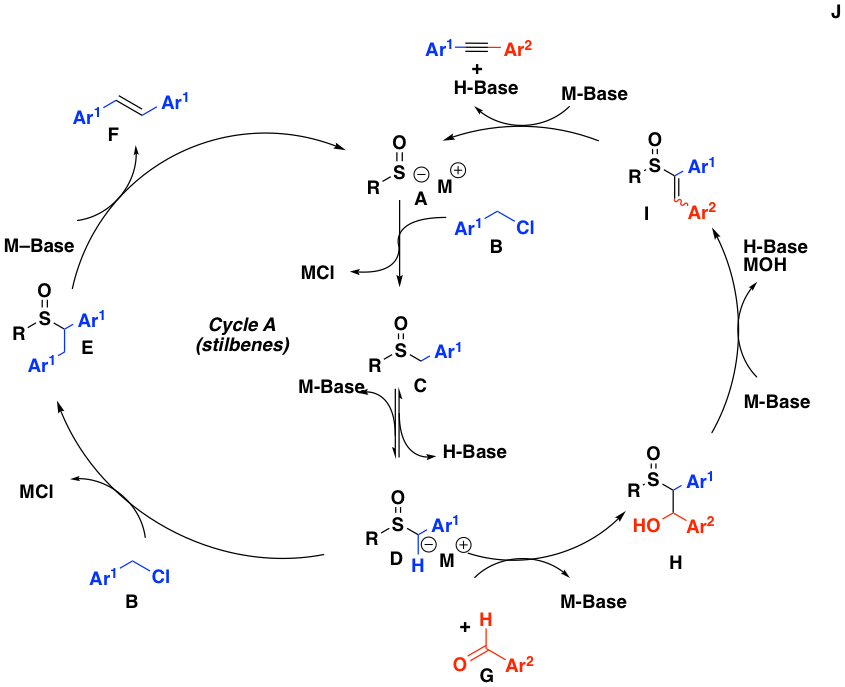