Christopher H. Browne Distinguished Professorship in the School of Arts and Sciences

Hydrogen trioxide radical: This laboratory obtained the first infrared spectrum of the hydrogen trioxide (HOOO) radical, an intermediate invoked in the H + O3 and O + HO2 atmospheric reactions as well as the efficient vibrational relaxation of OH radicals by O2. There had been much debate in the literature as to whether HOOO is stable or metastable with respect to the OH + O2 limit, as well as the relative stability of the cis and trans conformers. We have characterized the geometric structure, vibrational frequencies, and stability of the cis and trans conformers of HOOO and its deuterated analog. In particular, by measuring the OH product state distribution following IR excitation of HOOO, we have directly determined the stability of trans-HOOO and shown that is much greater than prior estimates. As a result, HOOO may act as temporary sink for OH radicals and be present in measurable concentrations in the Earth's atmosphere. The experimental stability indicates that 25% of the OH radicals in the vicinity of the tropopause may be bound to O2, rather than free OH radicals. Studies of combination bands in the fundamental OH stretch region reveal nearly all other vibrational modes of trans- and cis-HOOO.  We have subsequently derived a torsional potential from our spectroscopic data to obtain the relative stability of the cis and trans conformers and isomerization barrier, which are critical for atmospheric modeling of HOOO. 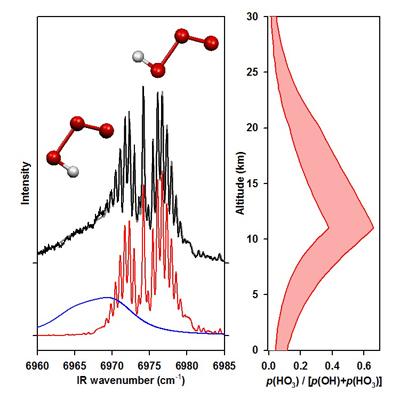 IR action spectrum of cis- and trans-HOOO in the OH overtone region (left), and fraction of atmospheric OH predicted to exist as HOOO (right).

Dynamical signatures of quenching: Collisional quenching of electronically excited OH A2Σ+ radicals has been extensively investigated because of its impact on OH concentration measurements in atmospheric and combustion environments. Yet little is known about the outcome of these events, except that they facilitate the efficient removal of OH population from the excited A2Σ+ electronic state by introducing nonradiative decay pathways. The quenching of OH A2Σ+ by H2 and D2 has emerged as a benchmark system for studying the nonadiabatic processes that lead to quenching. Theoretical calculations indicate that a conical intersection funnels population from the excited to ground electronic surfaces. Our studies examined the Doppler profiles for the H/D-atom products of reactive quenching, which show that most of the excess energy results in vibrational excitation of ‘hot’ water products. Our work also focused on characterizing the nonreactive quenching process, where OH X2Π products are generated with a remarkably high degree of rotational excitation and lambda-doublet specificity. The OH quantum state distribution directly reflects the anisotropy and A′ symmetry of the conical intersection region. We also demonstrated for H2 and D2 collision partners that reaction accounts for nearly 90% of the quenched products.  These distinctive dynamical signatures of passage through a conical intersection region have sparked intense theoretical interest in this system.