Metal Complexes of Unsaturated Main Group Ligands Metal complexes of silicon analogs of common carbon-based ligands such as silylenes and sila-olefins have only recently been prepared and remain quite rare, despite their proposed role in metal-catalyzed transformations at silicon and potential utility in the selective formation of silicon-based polymers. The synthesis and properties of metal complexes of unsaturated silicon compounds such as silenes (R2Si = CR2), disilenes (R2Si = SiR2) and silanimines (R2Si=NR) is an active area of investigation. We have recently synthesized and structurally characterized examples of each of the previous complexes. The reactions of these complexes with a range of organic and inorganic reagents yield interesting products, and provide further insight into the role of such species in catalytic reactions.

Unsaturated silicon complexes are also important intermediates in new catalytic reactions of organosilicon compounds, including new routes to organosilicon polymers. Silene complexes generated by beta-hydrogen elimination from metal silyls are the key intermediates in the first catalytic dehydrogenative coupling of alkyl silanes directly to oligomeric and polymeric carbosilanes, H(SiR2CR2)nSiR3. Polycarbosilanes are the most successful and widely studied class of polymer precursors for silicon carbide, but traditional methods for their synthesis are inefficient and nonselective. This research effort is currently focused on the detailed elucidation of the catalytic mechanism, the development of more active catalyst systems, and the extension of this new route to other classes of inorganic polymers. Other processes under investigation include the late metal-catalyzed redistribution and dehydrocoupling of silanes to polysilanes, and catalytic C-H bond activation and functionalization with organosilicon and other main group element groups. 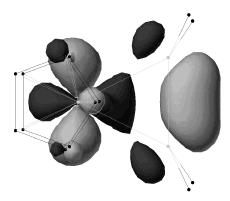