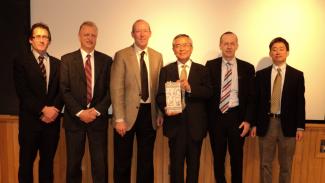 The Department of Chemistry at Penn mourns the passing of Ei-ichi Negishi (GR'62, HON'11). Prof. Negishi graduated from the University of Tokyo in 1958 before coming to America as a Fulbright Scholar and earning a Ph.D. at Penn under Prof. Allan R. Day. Following a postdoctoral stint at Purdue he joined Syracuse University as an assistant and then associate professor. He returned to Purdue in 1979 where he would remain until he retired in 2019.

Negishi won the 2010 Nobel Prize in Chemistry, along with Richard Heck (University of Delaware) and Akira Suzuki (Hokkaido University, Sapporo, Japan). The three scientists were recognized by the Royal Swedish Academy of Sciences in Stockholm for having independently made advances in using the palladium complexes as catalysts to link together carbon molecules into larger, more complicated structures. As noted by the Nobel Prize committee, “Palladium-catalyzed cross coupling is used in research worldwide, as well as in the commercial production of ... pharmaceuticals and molecules used in the electronics industry.”

He was the third recipient of the Penn Chemistry Distinguished Alumni Award in 2012.

https://www.purdue.edu/newsroom/releases/2021/Q2/ei-ichi-negishi,-one-of-2-nobe…
© 2022 The Trustees of the University of Pennsylvania
Penn Weblogin